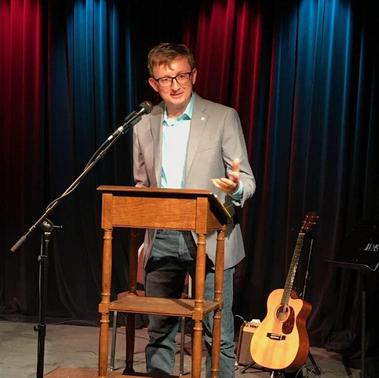 ​​​​​Kerry James Evans is the author of Bangalore (Copper Canyon), a Lannan Literary Selection. He earned a PhD in English from Florida State University, an MFA in creative writing from Southern Illinois University-Carbondale, and a BA in English from Missouri State University. The recipient of a 2015 NEA Fellowship and a Walter E. Dakin Fellowship from Sewanee Writers' Conference, his poems have appeared in Agni, Narrative, New England Review, Ploughshares, and many other journals. He lives in Milledgeville, Georgia, where he teaches in the MFA program at Georgia College & State University

and serves as the poetry editor for Arts & Letters.

the arrow piercing a metallic globe

points to a concrete angel

cradling a pot of incense

while the rosemary grows wild

and mint gives way to sage

discovering a divan the collapsed

trellis was once a ladder

for a rose the deer have since

eaten and don’t you know

that when a cowboy leaves

his boots out in the rain

his partner is bound to turn

those boots into planters

for a host of herbs hell-bent

on leaving the lemons

hang low this time of year

and the cardinal may only sing

Latin but there is an eastern

bluebird with a red breast

chasing a wren away from its

nest while a kestrel nose-dives

for a squirrel and misses I

sees a hand holding a needle