"In Bangalore, the poet maps his own experiences and mines them for content. There is never a hint of bitterness or blame in his poems; Bangalore reads as an act of control against a period of time in which he was almost completely controlled by his circumstances, and ultimately, an experience, and attitude, of grace." 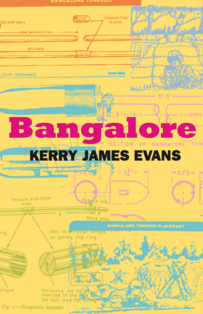 "The bangalore torpedo clears a path 10-15 feet wide through barbed wire entanglements. In minefield breaching, it will explode all antipersonnel mines and most of the antitank mines in a narrow foot path."

“Evans’ jarring debut book of poems draws on his experience as a combat engineer for the Army National Guard…A strong contribution to wartime poetry composed by combatants…Given recent controversy over domestic surveillance and enlisted whistle-blowers, this is a necessary read, indeed.”

"Evans spares nothing and no one in his poems, and yet he still finds a way to celebrate what deserves celebrating, and in the end, we’re left with hope."